Did you know that there is a mathematical theorem named after pizza? We didn’t either. But it’s called the Pizza theorem, and it states that the equality of two areas arise when one partitions. It’s elementary geometry, but still, we like equality and pie so we wondered: “Are there any good scoring pizza companies?”

Not many. But here are a few:

MOD Pizza. MOD is one of the fastest growing fast-food chains over the past few years, and has just raised another $160 million. What’s even more noteworthy (we think) is that almost none of that $160 million will be donated to politicians!

Blaze Pizza, its closest competitor, also has positioned itself as an affordable, custom made-to-order pizza company. Why can it be affordable? Once again, none of its profits are going to politicians!

More locally (for Goods Unite Us), Ian’s Pizza founded in 2001 in Madison, Wisconsin has also earned the honor of having our perfect score. Ian’s doesn’t play politics. But it loves to play with pizza (Ian’s is known for its wacky toppings).

Each of these companies stand out because there are not many pizza chains in our app that have great campaign finance reform scores. Little Caesars, Papa Murphy’s, Domino’s, Pizza Hut, and Papa John’s all have negative scores. And most of them make a ton of political contributions. This is far from equality, and therefore it isn’t in line with the Pizza theorem.

Next time you’re in the mood for some pizza, keep this in mind! 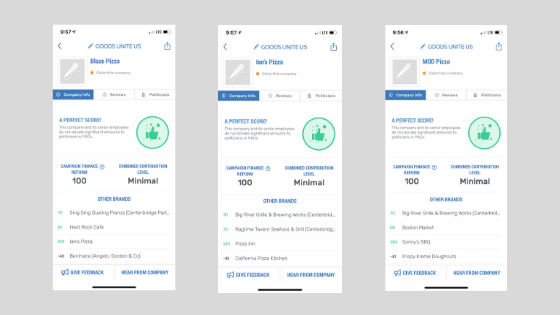