This is the second post in our Spending For The Senate blog series about the Georgia Senate candidates’ donors. Here, we’ve compiled the top backers to Reverend Raphael Warnock’s (D) campaign, which will help decide control of the Senate and with it, the course of COVID relief and President Elect Biden’s first two years in office.

In keeping with the Goods mission statement, this list does not rank PACs themselves, just the companies whose executives or subsidiary PACs have contributed to the Warnock campaign. In cases where one individual comprises the majority of a brand’s donations, that individual will be highlighted to clarify the stance of the impacted company. Numbers preceded by “~” are approximate. 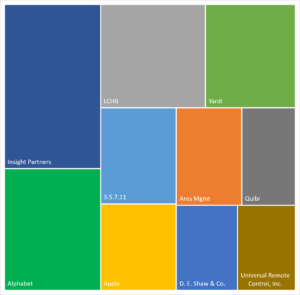 The first thing that jumps out here is the relatively even distribution of donations. The difference between the 1st and 10th place donors is ~$14,000. Digging a little deeper, the top 3.5 companies account for half of the top 10’s total, or half  ~$180,000.

That small number (for politics) starts to make sense when you account for the Warnock campaign’s aversion to Corporate PACs. It means the donations visualized above all come from individual executives at the companies, instead of a political fund. It also means that lots of the organizations listed above are there because most of Warnock’s fundraising has been from small-dollar donors, meaning a single, politically active officer can be enough to put a firm in his top 10.

Yardi Systems is the first example of this. It’s a real estate software firm and makes the list due to a few donations by one executive and his wife. Similarly, most of Apple’s total comes from two donations made by the founder of Siri and head of its Advanced Development Group, after Apple acquired the company. 3.5.7.11 and Universal Remote contributed nothing beyond what their respective founders gave. Quibi has a similar situation except, since it never achieved profitability, the money its founder gave likely came from the sale of his founding stake in Dreamworks Animation in 2016.

Candidates typically rely on a clutch of large-dollar donors that raise the bar for a list like this to at least 6 digits per entry, especially in such a critical race. Senator Loeffler provides a good case study. Her top 10 donors accounted for ~85% of the money her campaign had raised at the time of our analysis. Reverend Warnock’s top 10 makes up ~1% of his total, which is why his fundraising strategy is uniquely resistant to this sort of analysis: Since he mostly doesn’t raise from Executives, you don’t learn much by looking at them.

To give a better overview of the campaign’s finances, one must include some non-corporate groups. For example, the biggest donor group by job category is unemployed people who are neither retired, homemakers, nor students. It’s difficult to say with certainty that everyone who listed “Not Employed” on their donation meant “out of work” and not “retired” because the FEC forms allow for a lot of interpretation there by the filers. What is certain is that donors in this employment category made exclusively small-dollar donations and live in all 50 states. At this level of detail of course, any connection to current events like the pandemic or unemployment crisis would be purely speculative.

The other big employment category is the self-employed. They donated $1.2 million to Warnock and $368,000 to Loeffler. 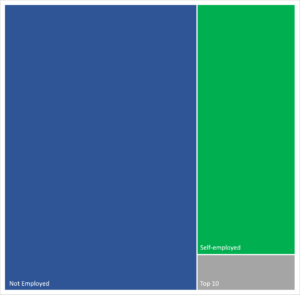 Who’s In The Better Position?

Finally, the differences in fundraising strategy make direct comparisons of the Warnock and Loeffler campaigns difficult. What can be said with certainty is that her mostly self-financed campaign has raised ~$28 million, not including allied but unaffiliated PACs. Warnock’s mostly small-donor, grassroots method has raised ~$22 million. By the end of the Special General election on November 3rd, each campaign had about ~$6 million left for the Runoff.

So, it’s tough to say who’s better off because Warnock has either raised more or less than Loeffler, depending on how you slice it:

Like we said at the beginning, the GA Senate runoffs will decide the center of gravity in American politics for the next 2 years. That fact underpins the stratospheric projections of the combined cost of these races, which runs as high as $200m. That makes them the locus of campaign finance for the next 6 weeks and Goods will be covering them in depth. To see the other posts in the series, just click on the links below as they become active: