Since the U.S. Supreme Court’s landmark Citizens United decision in 2010, corporations are, from a legal perspective, considered people in this country. They aren’t allowed to vote. But they are allowed to contribute to political action committees and to influence elections.

And because corporations have much deeper pocketbooks than everyday citizens, they have an oversized voice in our elections. A corporation that funnels hundreds of thousands or even millions of dollars to support a politician is always going to get more attention than an individual.

Our goal at Goods Unite Us has always been to make company politics more transparent. You can download our free app or search our website, for example, and easily find out who corporations and their senior managers are supporting with their political contributions.

We feel that, given Citizens United, the only way to fight back against corporate political influence is to start holding corporations accountable for their political actions. In other words, if corporations have a political voice, we want everyone to hear what they are saying.

For years, we’ve focused on the consumer side of the coin. We’ve encouraged people to use our tools to take into account a company’s politics when making their purchasing decisions. If enough Democrats stop buying cars from Toyota, for example, because they support Republicans more than Democrats, perhaps Toyota will think twice about its political giving. At least that is our hope.

But consumerism is only part of the solution. Companies care about sales; but they also care about their stock price. Company CEOs and management are judged, almost exclusively, based on how the company’s stock performs. If it goes up, they get large bonuses. If it goes down, heads roll.

The Politics of S&P 500 Index Funds

Some people buy individual stocks. But most people have large chunks of their investment and retirement assets planted in index and mutual funds (which are made up of a mish-mash of different stocks).

There are lots of different index and mutual funds, so doing this important work will take us some time.  A few common index funds, however, are in most people’s investment and retirement portfolios. So, we decided to start with those.

This post releases the results of our analysis of the three major S&P 500 index funds. These three funds alone hold more than $1.15 trillion dollars of people’s savings:

(Because these common funds all track the same S&P 500 index, the list of companies contained in each fund is nearly identical) 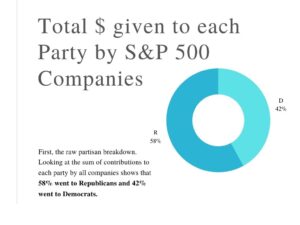 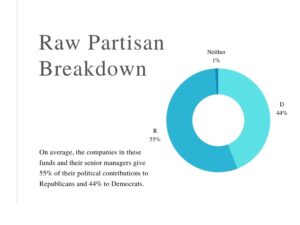 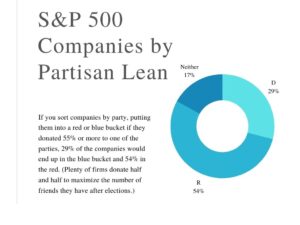 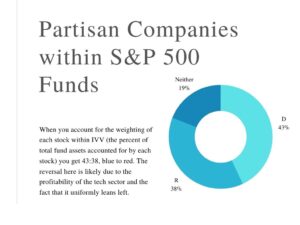 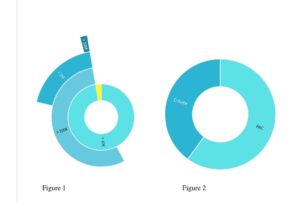 Finally, 60% of the total contributions made by the S&P 500 came from corporate PACs (figure 2 above). This is especially important in light of the wave of corporate PACs that have gone on pause since the Capitol seige.

Goods will continue our analysis of major investment instruments, so stay tuned for those updates!