When Nike announced that its 30th anniversary “Just Do It” campaign would feature Colin Kaepernick, the social media response was explosive. Kaepernick is, after all, a politically controversial figure (at least to some). And Nike took a huge (and presumably calculated) risk featuring him in its campaign. 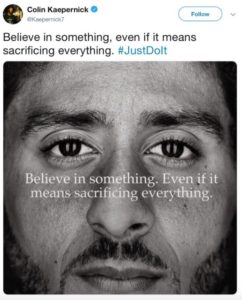 As background, the former San Francisco 49ers quarterback took a knee during the national anthem to protest police brutality. His gesture soon became a movement within the athletic arena, and has since been called unpatriotic by many (most notably, President Trump). And for his actions, Kaepernick has essentially been banned from the NFL.

President Trump was none too pleased with Nike’s ad campaign: calling it “a terrible message.” And Drew Brees even tweeted that he “agree[d] with his (Kaepernick’s) protest, [but] I DON’T agree w his METHOD.”

All of this has been widely reported. But what has been less widely reported is how Republican-leaning Nike and its senior employees are, which makes the company’s actions even more striking.

Where Does Nike Stand Politically?

We did some digging. And here are the hard facts about where Nike and its senior employees put their money:

When you download our app, you’ll see that Nike’s Campaign Finance Reform Score is (-48) and that its donation distribution is 58% Republican and 42% Democrat.

Does their controversial marketing stance reflect their politics? It certainly does not seem so. But now you can decide for yourself!