The Senate races in Georgia have drawn almost 500 million dollars into the state. And that’s just money raised directly by the 4 main candidates. When you factor in outside spending, the figure is closer to $800 million. If you split it, since there are 2 races, that’s $400M apiece. Which is still a lot for a Senate race, especially one taking place in a state that wasn’t really a battleground 3 years ago. So, how’d that happen?

Until very, very recently, Georgia was as Red a state as you could find. It bounced from Confederacy to Dixiecrat to Conservative with the votes to prove it. It’s most famous landmark is Stone Mountain park, featuring a bas-relief of Jefferson Davis, Stonewall Jackson, and Robert E. Lee. The park opened on April 14th, 1965, 100 years after Lincoln’s assassination, to the day.

And then Joe Biden won the state and not 2 months later, both its Red senate seats are in danger of going Blue. Clearly, a lot’s happened.

To start, Georgia is now estimated to be the 8th most populous state in the Union. High state populations like that are always caused by people moving in, usually for economic reasons, because big populations mostly happen around booming economies. For Georgia, that’s been Atlanta and Savannah, airport and seaport respectively.

The thing is, an influx of workers like that will reliably produce a leftward political shift. That’s one of the reasons big states are synonymous with Blue states. The development of the state’s economy, coupled with the region’s Civil Rights history, gives you Georgia hitting swing state status ~20 years into the millennium.

Which tells us that GA is less Mississippi and more Ohio (7th most populous incidentally). But it doesn’t explain the cash. What does is the Senate’s unique role in the government. Besides judicial and cabinet confirmations, the Senate does its thing with legislation. It doesn’t have the power of the purse like the House does, but it’s composition is based on geography more than population.

So if the 2 parties ever divide by population density, giving one control of the House, and one control of the Senate with a clear minority of voters, there’d be cause for alarm. But it wouldn’t really be a problem unless toxic partisanship meant that compromises stopped being struck because working across the aisle meant “working with the enemy” and losing your job.

In that case, the Senate could stop the whole machinery of government nearly cold. The House could set budgets, the President could do some things temporarily with executive orders, but the assembly line of legislation that produces real change would freeze solid and the whole Judicial branch would quit getting staffed.

This is roughly what happened in the waning years of Obama’s second term. And it’s this unique, emergency-shutoff power the Senate has which is driving up the price of its campaigns so steadily.

Add into this mix the virus and recession, along with a Senator’s early retirement, and you’ve got a pandemic response, economy, and nearly the whole power of the most influential government in human history hanging in balance, waiting on some election results from a battleground state so new it hasn’t even dug trenches.

Surprise, national importance is what gives you the following figures: 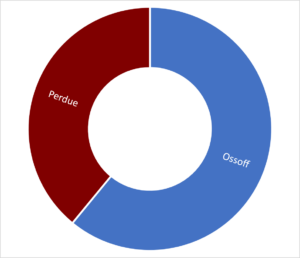 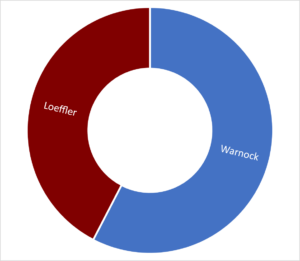 For comparison, this year’s presidential election, the most expensive in history, cost $14B. The following chart shows the cost of the GA senate campaigns as a fraction of 1 billion. 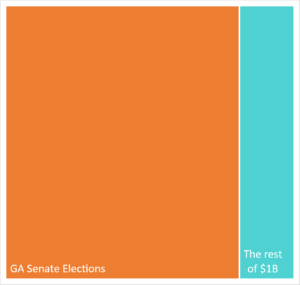 To put this in perspective, $1B is enough to buy the LA Lakers, an F-35, or the entire economic output of the Solomon Islands for a year. Meaning: if cost is any indication of value, it would be smart for us to pay attention to the results. Read our other blog posts on Spending for the Senate here and here.